skip to main | skip to sidebar

No. of Rounds Completed: 9 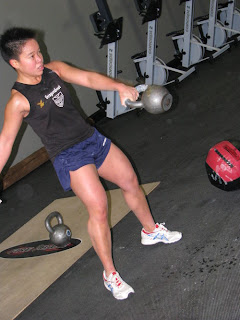 In the Sunshine State

I'm vacationing in Florida right now, which explains the dearth of posts. So far, I've visited Harbor City CrossFit, CrossFit Palm Beach, CrossFit Delray Beach, CrossFit Broward, CrossFit Affliction, and CrossFit Hardcore -- all in 3 days. Looking forward to hitting up the affiliates in Orlando over the next few days. Will update soon!
Posted by Feng at 10:31 PM No comments: Links to this post

The instructions for this workout were pretty ambiguous, so I performed the lunges with two 50# DBs (yes, in case you were wondering, they were pretty f%&*ing heavy) at the low carry position. Swings were performed with one 50# DB to full overhead lockout. Perhaps I hadn't noticed the need for torso stabilization as much with lighter weights, but I definitely felt it today. I think weighted lunges are a great exercise for developing core stability! Oh, and heavy weighted lunges beat weighted stepups any day in terms of Ass-Kicking Potential (AKP)*.

*A term created by Keith Wittenstein of CrossFit Virtuosity, and frequently used in the CrossFit circle to objectively quantify the Suck Factor of a particular movement.

Ladder is for thrusters only. Starting with 25, then 20, then 15, 10, 5, then 10, 15, 20 and ending at 25. Do 10 pull-ups between each set of thrusters. Try to do unbroken sets of both thrusters and pull-ups. That is very challenging though, so if you can't then do as many as you can in the first set, then finish them off. Get into the habit of only resting for 3 breath cycles between broken sets.

This workout wasn't as daunting as I originally imagined it to be. It's kind of like a Mega-Fran, which was, well, a real treat since I'd done Fran only two days ago. I must say, 65# thrusters definitely feel really light, after using 95# for all my workouts. I was glad that the prescribed weight (for males) on the Navy SEALs site was 65# for this workout, since it allowed me to gauge the progress I'd made via consistent overloading.

If this workout ever reappears in the cycle, I'll try to minimize the number of breaks within sets of thrusters and pullups. I realized that I didn't exactly follow the instructions of performing as many reps as possible in the first set. My strategy instead was to break the entire set down into more manageable sets, which explains sets like 10T/8T/7T. It's probably wholly psychological, but it makes it seem far more doable.

***
"It is difficult to produce a television documentary that is both incisive and probing when every twelve minutes one is interrupted by twelve dancing rabbits singing about toilet paper."
- R. Serling
Posted by Feng at 10:34 AM 2 comments: Links to this post

True to my word, I had to do "Man-Fran" today... And I was pleased as hell with my time, since my initial goal was to finish under 10 minutes!

***
"Human beings, who are almost unique in having the ability to learn from the experience of others, are also remarkable for their apparent disinclination to do so."
- Douglas Adams
Posted by Feng at 11:54 AM 3 comments: Links to this post

I made a commitment to step it up a notch on workouts that call for the typical Rx'd women's weight (65#), by using 95# for these workouts. Now there's no turning back! While not unmanageable by any means, consistently adding 30# of weight to the bar definitely makes a considerable difference, both in terms of length of time required to complete the workout (duh) as well as recovery. I've noticed a little more soreness in the days following such workouts. It's good, I suppose, since I rarely am afflicted by DOMS from CrossFit alone (distance running and gymnastics are separate issues here). So it's good to know that I'm challenging my muscles in a different way and forcing them to adapt to using a heavier load as a baseline.

First actual session of Starting Strength -- dialed the weights way back as per Rippetoe's recommendations, so it was a very easy day. Though I don't think I'll be saying the same thing a few weeks from now! ;)

***
"I am of the opinion that my life belongs to the whole community and as long as I live, it is my privilege to do for it whatever I can. I want to be thoroughly used up when I die, for the harder I work the more I live."
- George Bernard Shaw
Posted by Feng at 12:19 AM 3 comments: Links to this post

***
"A man is called selfish not for pursuing his own good, but for neglecting his neighbor's."
- Richard Whately
Posted by Feng at 12:16 AM No comments: Links to this post

Feng
Ann Arbor, Michigan, United States
I thrive on anything related to fitness and human performance.

Words to Live By

My flesh and my heart may fail, but God is the strength of my heart and my portion forever.
- Psalm 73:26 (NIV)


Watch and pray so that you will not fall into temptation. The spirit is willing, but the body is weak.
- Matthew 26:41 (NIV)

I'm powered by Joust. What about you?

\ˈjau̇st: to engage in combat or competition as if in a joust

My Type of Box

Where to Get Gear

Sports in the Lion City